STATEN ISLAND, N.Y. — Is Staten Island one step closer to floating away from New York? Amid controversial talks from South Shore Councilman Joe Borelli (R) reviving a decades-old fight for our forgotten borough to secede from the rest of the city, a new website has come to life asking Staten Islanders to have their voice heard. Sam Pirozzolo, the Staten Islander infamous for erecting a 16-foot-tall wooden Trump “T” and current City Council hopeful, is behind the aforementioned website  “Stexit: Movement for the secession of Staten Island from New York City.”

Pirozzolo, 56, of Castleton Corners, says he decided to create the website so that local residents could “weigh in on a very important issue.”

“I think everyone on Staten Island should be a part of this decision together,” he told the Advance. “Let’s not forget, many Staten Islanders wanted this to happen years ago.”

In 1993,65% of Staten Islanders voted in favor of leaving New York City and creating their own independent city. The city never held a secession vote and the measure for Staten Island to secede died in committee. 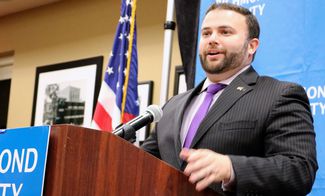 Borelli plans to introduce two pieces of legislation by next month.

Pirozzolo says that this time around, he wants to hear from residents who voted back then and ask if anything has gotten better since.

“Were you on Staten Island when that vote took place?” he asks. “And what do you feel has improved?”

The fervent supporter of Borelli’s secession pitch says he hopes residents visit his website to not only complete the survey, but educate themselves on what financial obstacles Islanders currently face. 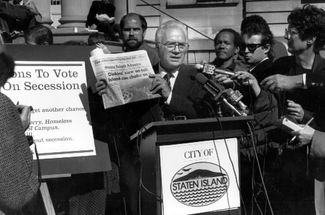 Maybe better the devil we know.

“My goal is to make people understand that we pay a lot of taxes,” he says, “and are we really benefitting from them the way we’re set up?”

When asked if actual secession is his overall hope, Pirozzolo says: “Sure — if it’s financially possible, yes.”

Read the article on the Staten Island Advance website at https://www.silive.com/news/2019/11/staten-island-gets-its-own-brexit-website-amid-secession-talks.html